After a week in Bristol, Mark and I headed back to the Cotswolds last weekend for Easter to spend some time relaxing in the countryside.  The weather on Saturday was absolutely glorious, so we put on some sunscreen (well, one of us did, ahem) and went for a long walk around the twin villages of Bibury and Arlington.  This particular spot is high up on the list of coach-stops for the Cotswold tours, for reasons we’ll get to in a moment.  But first, a fluffy duckling interlude (it was Easter, after all): 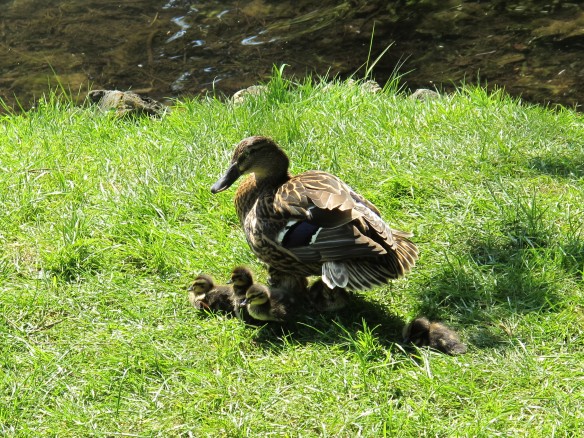 These little sweeties were toddling around by the stream in Arlington, charming the many visitors.  Mum was remaining very calm, all things considered.  You might almost say, unruffled.

Now, the reason for the tour buses:

These picturesque cottages are known as Arlington Row, and are owned by the National Trust.  They were weavers’ cottages once upon a time, and their occupants would not have been leading very pleasant lives being paid by the piece in these cramped little houses.  Now, however, they’re a big tourist draw.  Just out of the shot to the right are coachloads of tourists descending to partake of cream teas and the like.

We set off to escape the crowds on a ramble through the fields, and did for the most part, until we came to a crowd of cows.

I don’t know very much about cows, but I do know that walking inbetween mummy cows and baby cows isn’t a good idea.  None of the cows in this field were babies, but some were younger than others, so might have been teenager cows and their mums- in any event, we skirted around them carefully and were on our way again without trouble!

Back in Bibury we found a pub which wasn’t too busy that had a lovely garden and picnic tables in the shade.  We stopped for lunch and elderflower presse for me and a pint of real English ale for Mark (Cotswold ale in fact- Hook Norton or ‘Hooky’).

I had a little nap on the picnic bench, with a canopy of leaves and blossoms above me.

All in all, a perfect walk.

This towel rail appeared at the fantastic but expensive secondhand shop in Clifton (the poncey neighbourhood of Bristol where I live) since the last time I was there two days ago, and was a bargain at only £20.  It’s the perfect size for our new fluffy white towels, and now sits in the bathroom.

After travelling for 9 months, it is joyful to have lovely fluffy towels instead of thin quick-drying ones, and a beautiful towel rail upon which to dry them instead of draping them over the back of a door or similar.  Or stuffing them wet into the backpack.  These quiet pleasures compensate in a small way for not being free as a bird with no to-do lists and a new place to see every day… but my list of must-visit places is growing ever longer!

As I mentioned before, we’ve been having lots of fun recently picking up secondhand furniture for our new flat.  The refurbished sideboard is now in the bedroom:

Mark took this next one:

We also picked up two stools/side tables at a yard sale which were pretty unprepossessing when we got them, but we (actually, Mark) painted them pale ‘cotswold’ green- which is incidentally very similar to the colour of the wall in the main room of our flat. Here they are before their makeover: 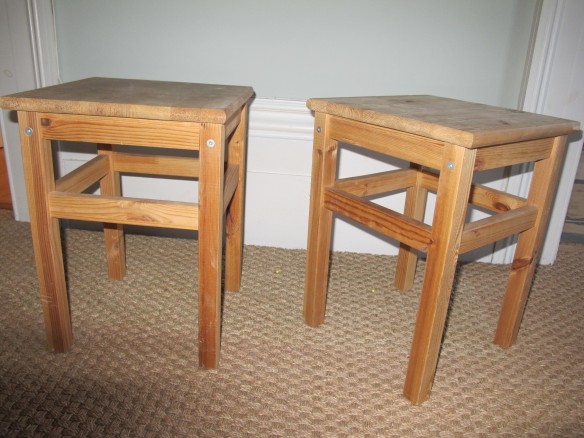 They’re now in general use as step-stools, resting places for mugs of tea, etc.

A more decorative find was this fantastic mirror:

I was initially skeptical but Mark was very keen on it, and now I think it’s brilliant.  The key for me is to not surround it with really a ‘finished’ look or girly crap, but instead have it in a simple or slightly rough-round-the-edges setting.  Above the fireplace is the perfect spot for now.

You can’t see much of the fireplace here but it’s not that fancy to be honest so you’re not missing out.  No period tiles, but considering the grandeur of the rest of the flat it seems a bit churlish to complain!

There is more, but I will save it for another post.

Sometimes I just want to make a cake.  And very rarely, I have all the ingredients I require actually in the house.  This was one of those times, so I stirred and scraped and licked the spoon, and then contemplated decorations.  I have never tried to use crystallised flowers before but the wild violets growing in the cracks in the terrace inspired me so I thought I’d give it a whirl. 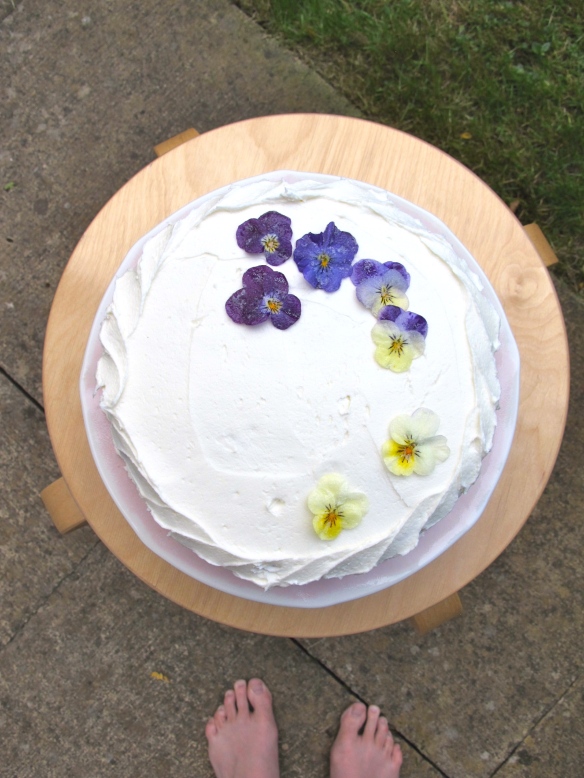 It turns out to be a lot easier than I’d anticipated- you just brush a little beaten egg white on both sides of the flower, sprinkle caster sugar on both sides, and leave to dry on a drying rack for a while.  I didn’t do the drying bit actually, as I wanted to put them on the cake straight away (so I could take photos and then eat immediately, obviously!) but they were still fine.  In fact, better, because I kept changing my mind about where I wanted to put them, and I think if they’d been dry they would have crumbled. 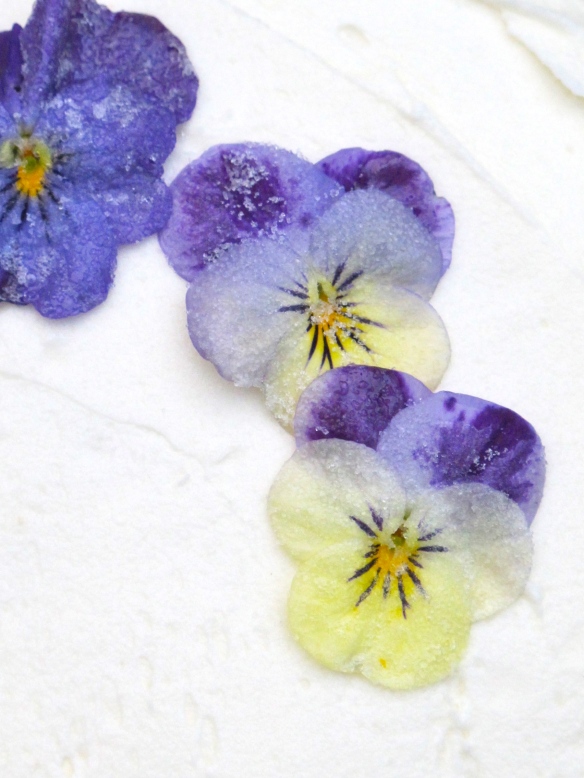 When we moved to the Cotswolds, we were struck by the abundance of mud and its capacity to adhere to footwear in the most persistent manner.  The recent warm sunny spell has dried up most muddy patches, but this is still England and it will rain eventually, at which point those patches will reappear, and the mud-caked boot problem will again be a priority.

So, a solution: the boot-scraper!

We found it at a reclamation yard (already embedded in the stone slab) and brought it home to Stow where Mr. Meg installed it by the front door.  It looks excellent, and I can’t wait for an opportunity to test it out.

Also at the reclamation yard was someone who seemed to be just begging to come home with us.  How could we refuse?  Petunia Pig is now happily ensconced in the back garden on a nice sunny bit of wall.  Although, if at any point a mud-puddle should appear in the garden, she might sneak over to it, as pigs are wont to do.

We are now settling into our flat in Bristol, and still marvelling at our grand surroundings and high ceilings.

This is the outside of the flat- we are on the first floor (UK) or second floor (US).  It’s the one with the balcony, which is lots of fun.  An aussie friend came to visit today and asked ‘you got the barbie out there yet?’  Not quite, but we’re working on it!  Indoor photos will follow when there aren’t piles of our belongings in corners everywhere.  We have very little furniture in the flat, and are aiming to avoid buying new things but instead find reclaimed items, in the spirit of frugality and sustainability (and because new furniture looks v. odd in this old place).  However, it takes time to track these things down- it’s a lot of fun though.

Our prize find so far is this sideboard, which we are now using as a dresser in the bedroom.  It was £30 from a wood reclamation yard, and we’ve stripped it, sanded it, and re-varnished it in a clear varnish so it looks all lovely now.  Sadly there aren’t any proper ‘before’ photos as we had a little disappearing-photo computer incident.  This is a progress photo, and I’ll post the ‘after’ shot tomorrow, as well as some photos of other recent acquisitions.  First, though, to show off some purchases made on behalf of my mother…

In other news, we are moving to Bristol tomorrow, so there may be a short hiatus in blog posts whilst I get the interwebs sorted in our new (rented) flat.  We will be living quite near the gurt big spenshun bridge, as I’m told they might say in our new city, and gaining splendid calf muscles from all the walking up and down hills.

The move is partly because Mark is now working on another great Bristol landmark, the Theatre Royal, home of the Bristol Old Vic.  This is apparently the oldest theatre auditorium in the UK and is, as we have good reason to know, currently undergoing renovation. 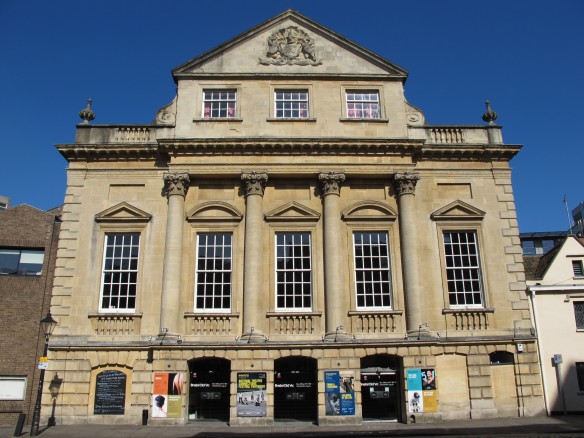