Hmm… my last post was in March, and it is now May.  A bit of a whoopsie.  I think this is what happens when things get busy at work- my brain is done for the day by the time I get home, and I lounge on the sofa reading murder mysteries instead of doing the fun things that I like doing, (i.e. taking photos, sewing things, blogging) because those things require creative brain juices and my brain juices are fully squeezed by the time I get home.  Thanks, work!  Anyway, let’s not dwell on it.  My work is interesting and pays me well, so there is that.

Moving on to the photo illustration of today’s blog: I am not sure how I feel about iPhone apps like Hipstamatic and Instagram (the latter of which I haven’t tried).  They make things look all cool and moody and old-fashioned to the casual observer, and thus feel to me a bit like the photographic equivalent of a mock-tudor house in the suburbs.  Which isn’t to say that I won’t use them, but I suppose when I do I want to say ‘I am doing this in a knowing way! I am aware this isn’t really the real thing!’ as if everyone else who uses them thinks they are.  Maybe it doesn’t matter.

Which is a long-winded introduction to a photo of my lunch- almost certainly another modern-day cliche, the blogged lunch photo.  What can I say, dipping my toe back into blogging, my lunch was pretty today!  Banana, raspberries, blueberries and yoghurt.  I am getting excited about all the lovely berries which will soon be in season…. clotted cream at the ready!

I had a great charity-shop find today- a goblet-like fruit bowl for my office.  It was dark by the time I thought to take a photo of it, and the resulting images (both Hipstamatic and regular iPhone camera) are a good reminder of how odd office lighting is. 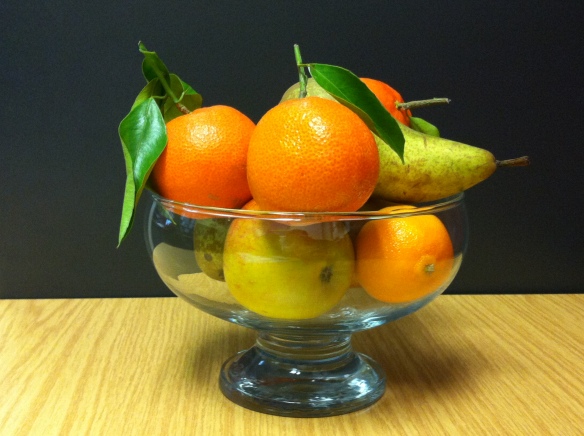 Having grown up in the US with supermarkets as the only realistic choice of food shopping venue, I am fascinated by the greengrocers I encounter here in the UK.  They aren’t so prevalent in central London (and anyway I was at work the whole time) but here in Bristol I am lucky enough to live around the corner from one fantastic greengrocer, and work a stone’s throw away from another. 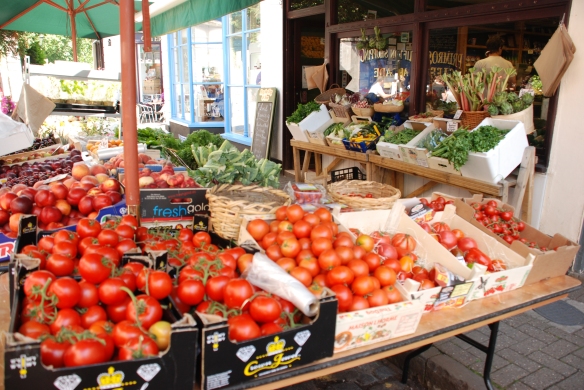 This is the shop around the corner from home, and it is a feast for the eyes as well as the tummy.

The thing I love most, though, is watching the British fruit appear in the shops (they always put labels on to tell you where things are from) and noting the change in seasons.  A few weeks ago, as you may have seen from my sad cherry pie story, English cherries were calling to me irresistibly from their boxes.  Now they’re gone, replaced by cherries from Canada, but I’ll wait until next year to buy some.

Yesterday I saw another shift- the appearance of damsons, apples, and blackberries from the UK.

Late summer is upon us… it’s time for apple and blackberry crumble, and for making damson jam.

Saying that, damsons were actually the one fruit we had direct access to when I was growing up, because there was a damson tree in the garden.  My mum and my sister (with occasional help from me, but I wasn’t as much of a jam fanatic as they were) picked the fruit and boiled it up to make fantastic damson jam which is even now the preserve of choice for my sister, and high in the running (along with marmalade) for my mum.  If only she’d been able to grow seville oranges in the garden I think she would have had nothing left to wish for…

I have been doing a bit of foodie experimenting recently, inspired by all the yummy shops around the corner from me in Clifton.  Not least of these is Reg the Veg, an excellent greengrocer who sells all sorts of delicious vegetabley things.  We’ve had asparagus recently, and I have also been captivated by watercress, which I love.

I made a salad for dinner the other day which consisted of salad leaves (chiefly the aforementioned watercress, but it’s a bit powerful on its own so I mixed it in with some spinach leaves and red oak lettuce), blanched green beans and broccoli, topped with grilled halloumi and softish-boiled eggs which I cooled for a bit and then peeled and chopped up.  It was very tasty, with some bits of garlic toast to munch on as well.

I also made pizza.  Not being a fan of tomato sauce, eating pizza in restaurants is often a bit frustrating, as if I ask for no tomato sauce the staff usually look at me as if I’ve sprouted an extra head.  So sometimes I do, and sometimes I don’t, but I always wish I could just go into the kitchen and put what I like on the pizza with no funny looks.

I used Jamie Oliver’s pizza dough recipe, although I halved the amounts as there were only two of us.  Even so, it made lots. 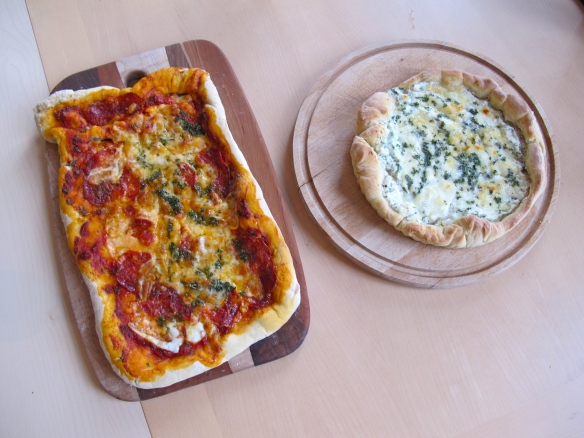 Aside from some issues getting the pizzas onto their trays and into the oven (actually owning suitable trays would be a start- I think the trick to a crispy base is to put the tray directly onto something that’s been pre-heating in the oven, like a pizza stone or an oven tray, so I was trying to achieve that and there was a bit too much juggling of raw pizza dough as a result) they came out beautifully.  Mine has a base of ricotta cheese mixed with garlic and parsley and salt, topped with mozzarella, parmesan, rosemary and more parsley, and Mark’s has a base of tomato puree mixed with garlic, parsley, salt and a bit of water to make a sauce, topped with mozzarella, spicy salami, and parsley.   I think next time I might strain the ricotta a bit before making the sauce, but that’s just quibbling really.

I also made Ashley English’s chocolate peanut butter cups (recipe here) which tasted sublime, but were a little unprepossessing in appearance, chiefly because I didn’t have lining papers so made my own with greaseproof paper.  Do try them if you’re so inclined- they are scrumptious. 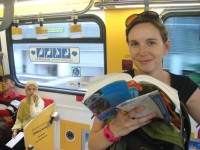